The International Motor Show, the industry’s leading trade fair, is attracting a huge audience. On the occasion of the inauguration of the new Hall 11 of the Frankfurt Trade Fair in 2009, the BMW Group presents its trade fair concept and, with its three brands BMW, MINI and Rolls-Royce Motor Cars, is the first exhibitor to inaugurate the new Hall 11 – Europe’s most modern exhibition hall.

The highlight of the trade fair appearance is the several hundred metre long circuit, which runs around the entire exhibition area. The BMW EfficientDynamics fleet and all vehicle world premieres are presented for the first time.

gate.11 develops a concept for the gigantic LED surfaces, which surround the entire 300-metre-long roadway, that turns the circuit into a complex staging and interactive 360-degree display. Uniquely developed synchronous effects accompany the vehicles on their way through the exhibition hall – visually through effects on the media surfaces and acoustically through the spatially moving sound.

The vehicle presentations, which for the first time are active on the road, and the audiovisual room atmospheres in the entire hall, both on the circuit and in the individual exhibition areas, open up a new era in trade fair communication. It lays the conceptual foundation for the following BMW trade fair productions in Frankfurt at the IAA.

In addition to sound collages and acoustic room atmospheres, gate.11 designed and produced over 70 films to stage the circuit and the entire exhibition hall. 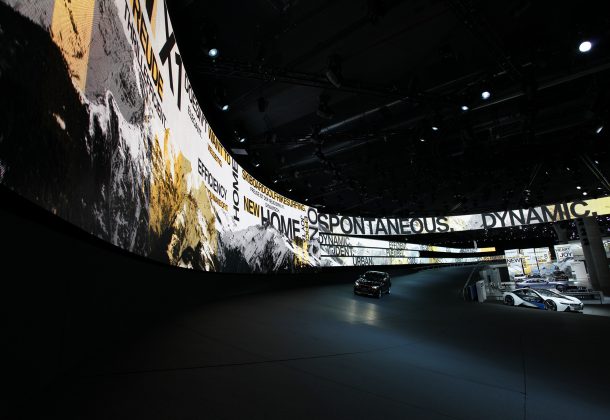 Interactive visual effects: flying leaves as you pass by

Highlights of the media staging of the 300 metre long circuit are interactive effects: the films “react” visually and audibly to the passing vehicles.

For this purpose, the vehicle movements are tracked using light barriers and transponders, so that the effects – e.g. flying leaves as the vehicle passes by – can be triggered precisely. In this way, it is ensured that the animations on the media surfaces behave synchronously with the speed of the vehicles. Sound and sourround effects also accompany the vehicles through the hall. The interplay of the interactive media presentation with the real vehicles and room conditions ensures an extraordinary intensification of the trade fair presentation, which literally immerses the visitor. 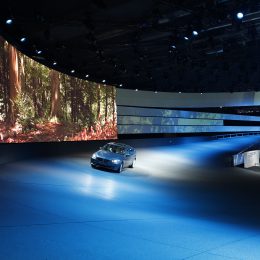 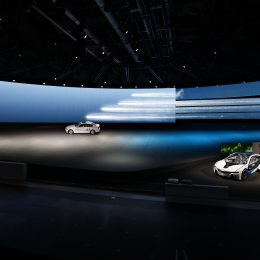 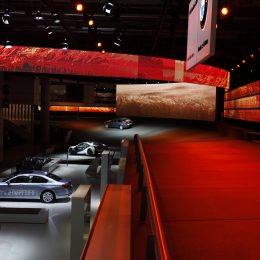 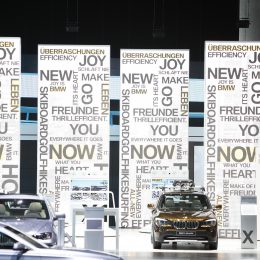 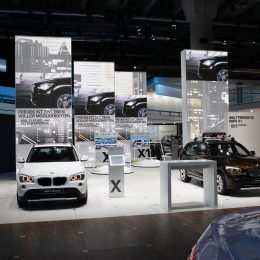 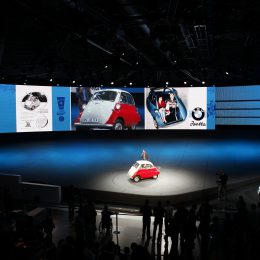 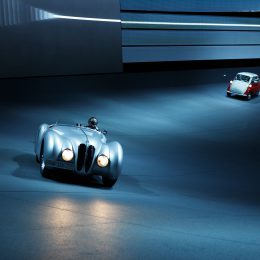 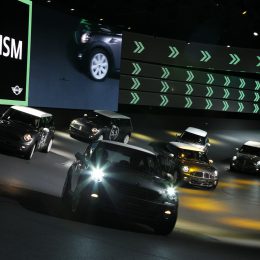 In 2011, the BMW Group once again is sending its vehicles on a circuit integrated into its trade fair presence. The media presentation for an active vehicle presentation is further developed by gate.11 and becomes also the absolute highlight at the IAA 2011.

In addition, there are now 15 daily shows, which – accompanied by gate.11 on film and sound – lead through the highlight themes. A 30-minute interactive presentation connects the individual shows. The sound and film clips, which are controlled synchronously with the vehicle movements, embed the vehicles in an overall staging. 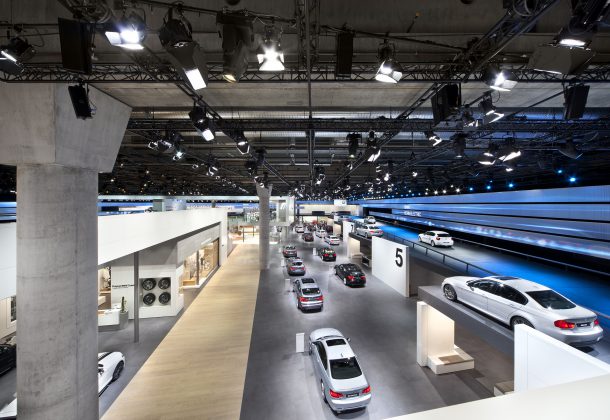 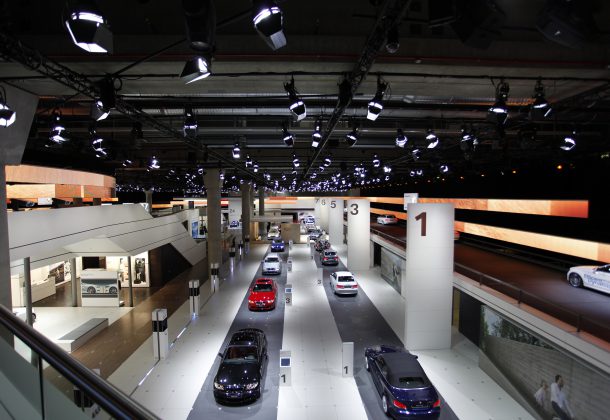 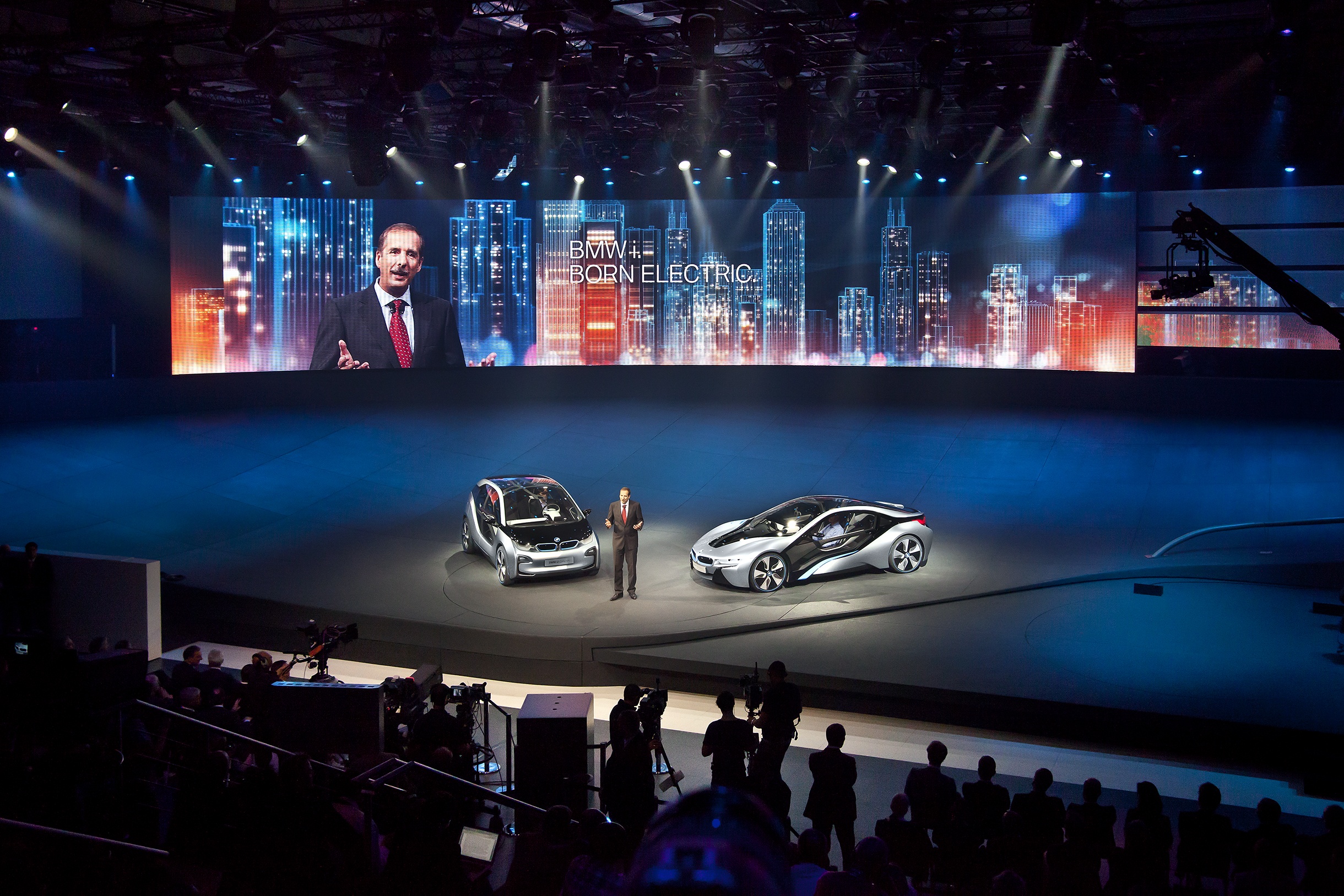 Milestones of the great coupes

As a calm counterweight to the technology-heavy shows, the big BMW design icons are staged as heritage and milestone presentations in 2011. For this purpose gate.11 is shooting exclusive vehicles such as the BMW 327/328, the BMW 503 Coupe, the BMW 3200 CS Coupe or the BMW 3.0 CSI in the studio. The design details and individual aspects of aesthetics are highlighted and translated into a spatial experience. 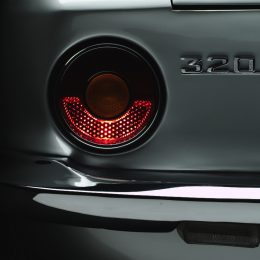 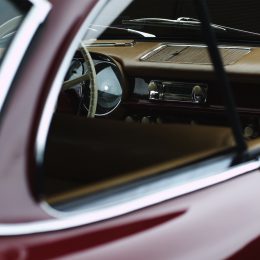 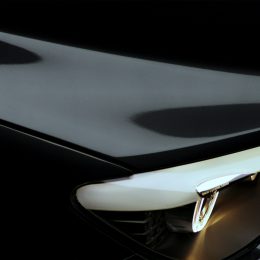 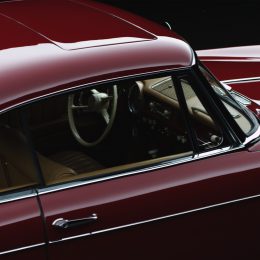 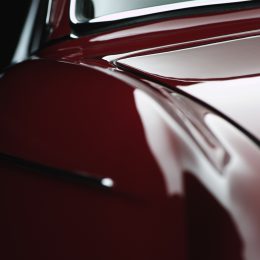 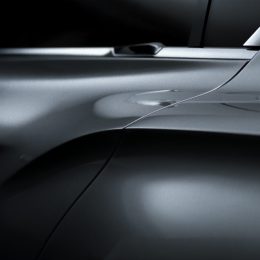 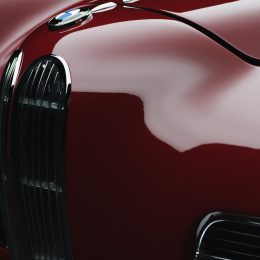 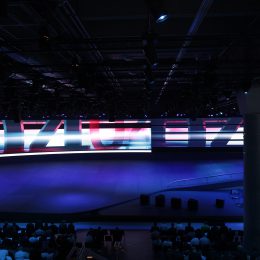 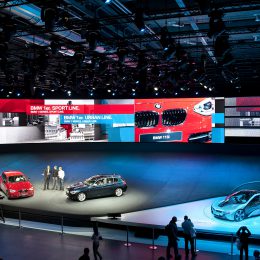 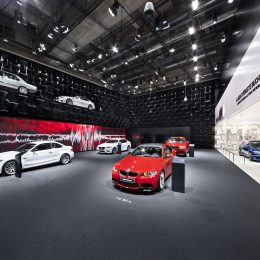 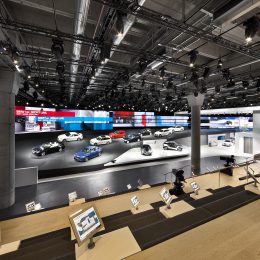 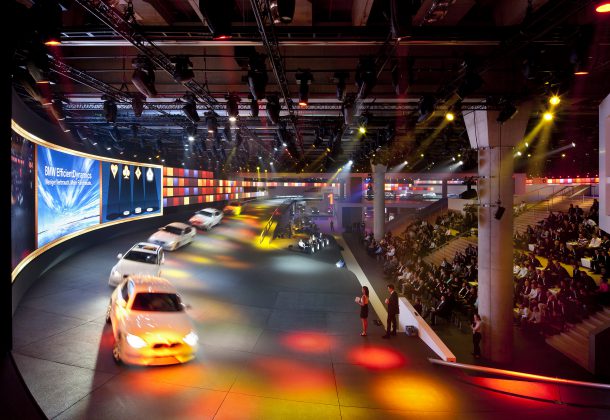 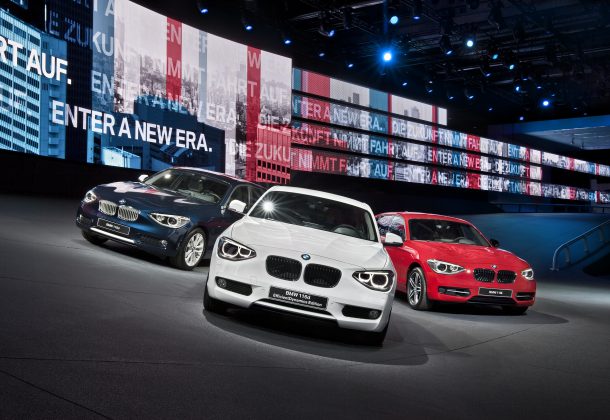